To share your memory on the wall of Carolyn P. Flournoy, sign in using one of the following options:

Provide comfort for the family by sending flowers or planting a tree in memory of Carolyn P. Flournoy

Provide comfort for the family of Carolyn P. Flournoy with a meaningful gesture of sympathy.

Carolyn was educated in the Public Schools of Holly Hill, where she first established her intellectual excellence. Always a very bright student, she graduated from Roberts High School in 1962, at the young age of 16. While at Roberts, she engaged in the extracurricular activity of playing the tenor saxophone, an instrument passed down from her older brother Webber, on the High School Marching Band. Following graduation, Carolyn began her post-secondary education at Allen University in Columbia, South Carolina where she achieved the honor of Debutante. As life would have it, she departed Allen University before graduating to pursue motherhood and administrative work. Later in life, she earned an Associate’s Degree in Business Administration from The College of Staten Island in 1981 (Staten Island, New York). In 1984, Carolyn graduated cum laude with a Bachelor of Science in both Business Administration and Psychology from Medgar Evers College of The City University of New York (CUNY; Brooklyn, New York).

Carolyn P. Flournoy, as she liked to be referenced, was vetted and evolved as a consummate professional in her fields of study, Business Administration and Psychology. Over her lifetime, she has held several positions that collectively define her robust portfolio of work experiences. Starting as a primary school teacher in Holly Hill, South Carolina, she migrated to New York to work in the Banking industry, The Head Start Early Childhood Education Program, and Early Poverty Program; with notable leadership roles as the Administrative Director for The Daughters of African Descent Day Care Center in Brooklyn, New York, and the Assistant Director of Public Relations for the Brownsville Community Corporation. Other noteworthy titles that she has held over the years include: Bookkeeper, Data Entry “CRT” Operator, Dorm Mother, Office Assistant, and Substitute Teacher for various institutions including the U.S. Department of Commerce, Cumberland County Schools, and Fayetteville State University, just to name a few.

To send flowers to the family or plant a tree in memory of Carolyn P. Flournoy, please visit our Heartfelt Sympathies Store.

We encourage you to share your most beloved memories of Carolyn P. Flournoy here, so that the family and other loved ones can always see it. You can upload cherished photographs, or share your favorite stories, and can even comment on those shared by others.

Posted May 22, 2020 at 07:08pm
In loving memory of your mother,
May you find peace in remembering all your mother meant to you and others as you feel the emptiness of losing your mother, your friend and confidant ❤️
God is always with you and we hope you feel the circle of love around you knowing there are many hearts that understand and care.❤️
May the healing gifts of time and the timeless love of God carry you gently through the loss you’re feeling now.❤️
With heartfelt sympathy,
Cousin Robin (Fladger) Baugh & Clarence Baugh and Family
Comment Share
Share via:
KE

Posted May 21, 2020 at 02:54pm
Sending prayers and condolences your way. We are deeply sadden in the loss of your love one. May God grant you peace during this time.
Comment Share
Share via:
PF 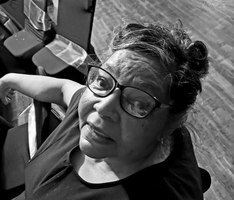