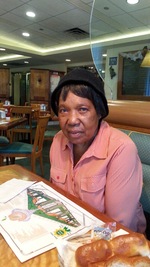 Rosie Lee Wells was born October 23, 1932, the fourth of fifteen children
to the late James and Mary Bell Lee.

Rosie accepted Christ as her saviour at an early age at St. Peters
Missionary Baptist Church in Greenville, Mississippi.
Rosie received her education in the Greenville Mississippi School system.
Rosie began her career early in life as a caretaker to her late mother and father
and a second mother to her younger siblings. She was a loving and devoted
mother to her children. She was truly the most loving and giving person, always
giving and never asking in return. Rosie relocated to New York City where she
ultimately settled . She was employed at various jobs in New York City. Upon
retirement, she relocated from New York to North Carolina, which would
become her final resting place.

Preceding her in death: her mother and father, loving son Daniel, three
husbands, eight brothers and one sister.