To share your memory on the wall of Robert Mack, sign in using one of the following options:

Print
Robert “Bernard” Mack, the son of the late Robert Otis Heath and the late Mamie Suggs Mack and Robert Louis Mack was born February 5, 1966 in Durham, NC. He transitioned from this life into eternity on October 24, 2019.

Bernard gr... Read More
Robert “Bernard” Mack, the son of the late Robert Otis Heath and the late Mamie Suggs Mack and Robert Louis Mack was born February 5, 1966 in Durham, NC. He transitioned from this life into eternity on October 24, 2019.

Bernard graduated from Durham High School in 1984. After high school he first worked as a cook at Darryl’s Steakhouse. Subsequently, he worked concurrently at UPS and Duke University for nine years before deciding to continue with Duke University alone for the next twenty-two years.

Bernard was baptized at Morehead Baptist Church at an early age and in 2001, he joined Union Baptist Church where he served as Assistant Scout Master of Troop 411 for 6 years and he served in the Usher Ministry for almost 6 years. Bernard also served as a board member on his neighborhood Homeowner Association for 10 years.

Bernard and Kennedine Bishop were united in holy matrimony on September 10, 2001. To this union was born one son, David Kennard.

Bernard was humble, kind, and compassionate. He was very attentive to his family. He was always present at celebrations for family members and he was always eager to bring the family together in fellowship by hosting special events. Bernard loved to travel, so much so that he, Kennedine, and David spent much of their leisure time traveling to visit family and friends. Bernard had a passion for service that was perhaps best evident in his leadership and work with the Cub Scouts and Boy Scouts. He especially enjoyed the camping adventures. Finally, Bernard had a grateful spirit. Even while hospitalized, there was always a smile, a thumbs up, a fist bump, or a hug for care-givers, family, and friends that offered assistance and support.

To send flowers to the family or plant a tree in memory of Robert Bernard Mack, please visit our Heartfelt Sympathies Store.

Receive notifications about information and event scheduling for Robert

We encourage you to share your most beloved memories of Robert here, so that the family and other loved ones can always see it. You can upload cherished photographs, or share your favorite stories, and can even comment on those shared by others.

Barbara Ecton, Missy Smith & Family, and other have sent flowers to the family of Robert Bernard Mack.
Show you care by sending flowers

Posted Jan 22, 2020 at 11:11pm
Just heard the sad news today and my heart was instantly aching. Bernie was one of the most fun loving guys I ever met. We joked that I was his worst nightmare but his smile always let me know where I stood. I haven’t seen a picture yet that captured the love of live that he had in his smile. It was contagious. Bernie, I hope you know how much you meant to us at Duke Raleigh Hospital. You will be greatly missed. My thoughts and prayers will be with your family and friends.
With much sympathy,
Carol Sorochinski
DRAH Materials Dept
Comment Share
Share via:
LP

Posted Nov 01, 2019 at 11:32am
To my "OLD" neighborhood family I send my deepest sympathy doing this time. My hearts and prayers are with the Mack family. Bernard was such a wonderful person with a beautiful spirit. We had fond memories growing up in Lincoln Apartments, thinking about the days as neighbors, when family and togetherness meant so much. May the God of all comfort give your family peace.
Lisa Parker-Hawkins
Comment Share
Share via:
JM

Posted Oct 31, 2019 at 11:25pm
I have not seen Robert "Mack Truck" since our graduation in 1984. I was just asking through a mutual friend (Roosevelt Waller) about him and remembering our days at Holton and DHS. I regret not making the time to meet up with him when I was in town.
Robert has always been a man of high character and a true friend.

May God comfort your love ones during these sad times.

Flowers were purchased for the family of Robert Mack. Send Flowers

Posted Oct 31, 2019 at 01:39pm
Bernard was such a good person. He was fun to talk to and fun to be around. I rarely saw him without a smile on his face and a positive word when I needed it. I call Bernard a friend and more than a co-worker. He was like family. I could laugh with Bernard, joke with him, or just have a great conversation with him. He always had a great attitude and a positive outlook on life in general. Bernard, the office is not the same without you. This all seems so surreal. I still expect you to be sitting at your desk when I get to work in the morning, maybe turn your radio up loud, or make that extra, special effort to walk to the back of the room to say good morning to everyone. I wish I knew why God wanted you so soon, but I know His ways are not our ways. He picked one of the best of the best. You set the example and others will continue to follow. God bless you, my friend and your beautiful family, always. You are truly missed.
Love you,
Bernice Daniels
Comment Share
Share via: 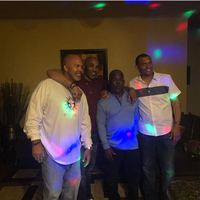