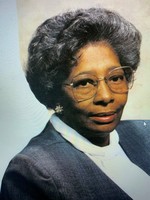 Notre Dame Bullock Johnson Hunt was born on April 3, 1926 in Granville County, the 12th child and 5th daughter of the late Vinie Allen and Hugh M Bullock. She found her eternal rest on June 23, 2020 at The Whitmore Retirement Center in Oxford, where she had been a resident for many years. Growing up in North Carolina, Notre was known for her strong voice in duets and choirs, for her expressive speaking voice in essays, poems and plays, and for her forcefulness in various organizations to which she belonged. She was a 1943 graduate of the Creedmoor Colored High School in Granville County.

Notre was married to the late Morphet Johnson, and to this union two children were born, Gwendolyn Johnson and Larry Johnson. She later married Charles Hunt, affectionately known as “Charlie”. Notre lived in Brooklyn, NY for 20 years. She started her career at Brooklyn Savings Bank as a bank teller and became the head of new accounts before she and husband Charlie moved to Mayfield, GA. They stayed in Georgia until they returned to the family home in Granville County, NC.

Notre was a strong and important contributor to the annual Bullock-Allen Reunion, an event which started in the 1930’s. She contributed many tasty dishes over the years, but the family especially looked forward to her sweet potato pie and macaroni & cheese.