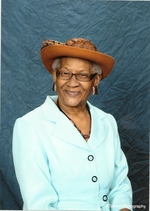 Mary Jane Peace Washington was born March 16, 1934 in Baltimore, Maryland. She was raised by the late Mercy Morgan and her mother, the late Nannie Elizabeth Peace Morgan. She was preceded in death by her brothers Devlaming A. Peace, Sr. and Thurman Lewis Morgan. She was educated in Durham County Schools and graduated from Hillside High School in 1952. She graduated with an Associate Degree from NC Central University in Durham, NC. She married the late John Edward Washington, and from this union they had one child, Donja.

She was a member of Deliverance Tabernacle in Hillsborough, NC and St. John Baptist Church in Durham, NC for several years. She joined New Jerusalem Baptist Cathedral in 1984 as a chartered member where she became a prolific Sunday School Teacher and church supporter. She was New Jerusalem’s first Sunday School Superintendent. She loved her church and was a member of the Food Service Ministry, Hospitality Committee, Willing Workers, Pastor’s Aid, Adult and Mass Choirs, Church Historian, and Youth Director. She was New Jerusalem’s Mother of the Year in May 1994 and worked faithfully to achieve one of her personal life’s goals and that was to travel to and explore the Holy Land. This she did in September 1994.

Mary Jane worked at Duke Hospital as a Food Service Supervisor, after which she resumed her work career in retail at Woolworth’s Department Store, Pope’s True Value Hardware where she received accolades as Employee of the Month several times, and concluded her work career at Rose’s Discount Store. She loved interacting with the customers and they enjoyed conversations with her.