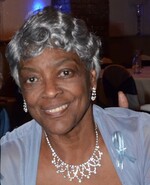 “I have fought a good fight I have finish my course. I have kept the faith”
II Timothy 4:7

Martha E. Whitfield was born in Brunson, SC on December 28,1940 to the late Leon Gantt and Martha Conley Gantt-Davis. She received her education in the South Carolina and New York school system. She departed this life on March 5,2021 at Arc of Hope Mills in Hope Mills, NC.

At an early age she joined Second Baptist Church. Later in life she joined Greater Emmanuel Pentecostal Church and was a member for over 20 years in Durham, NC. At the time of her demise, she was a member of Vision Community Worship Center, Fairfax, South Carolina.

She worked at New York Presbyterian Hospital of 20+years and at Duke Hospital for 5 years.
Martha loved to shop, travel and grow plants. Her love for hats could top the best of them Martha and Robert were well known in the community for the roll they played as foster parents,
Martha was married to the late Robert L. Whitfield, Sr for 38 years.