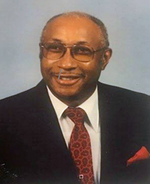 Louis Edward Cozart departed this life on Sunday, December 20, 2020 at Duke University Hospital in Durham, NC at the age of 93. He was born in Granville County in 1927, the last of eight children born to Noah and Mary Jones Cozart. He was preceded in death by his parents and siblings, Jonah Cozart, Lera Cozart Lyons, Alice Lee Cozart, Luther Cozart, Eva Cozart Lyons, Ulysses J. Cozart, Sr., Onnie V. Cozart Thomas and his late wife, Betty Hayes Cozart.
Louis attended Granville County schools and graduated from Hawley High School in 1947. He served in the U.S. States Army from 1950-1952 and was honorably discharged. After his tour in the military, he enrolled in Durham Business College and earned a Degree in Business. He later attended Durham Technical Community College.

While in High School, he met the former Betty Hayes. They later married on May 9, 1956 and this union lasted for over 63 years. This marriage was truly an example of a Christian marriage. The devotion both gave to one another was a testament to their love. They were inseparable. They were always together sharing special moments or serving those in need. His beloved wife, Betty, preceded him in going home to be with the Lord on July 31, 2019. Although Deacon Cozart did not have children, he has mentored many young people and served as a Father to others.

Deacon Cozart gave his life to Christ at an early age and joined Mt. Vernon Baptist Church. He served his church for over 80 years. His service began as Usher and Choir Member. He was later appointed as a Trustee where he served until being ordained as Deacon. He served as Deacon for 56 years, serving as Chairman of the Deacons Ministry for two terms. He was the oldest serving Deacon in the church. He has been a member of the Senior Choir for over 60 years. He was a member of the Masonic Lodge #74, where he served since 1948.

His working career began at John Umstead Hospital in Butner, N.C. and was then employed by the V. A. Hospital in Durham where he worked for 13 years. He was later employed by the National Institute of Health (NIH)where he retired after 22 years in 1988.

Deacon Cozart has been a very active leader in the church and community where he has led in bringing about positive changes and training younger adults in church leadership. He has been a faithful member of the East Cedar Grove Association; Ministers, Deacons and Deaconess Union. Deacon Cozart had a heart for people and his memory will live on in the hearts of people who knew him and the impact he made on their lives.

He leaves to cherish his memory, many nieces, nephews, and a host of other relatives and friends and a devoted niece, Annie Mae Cozart Lewis.