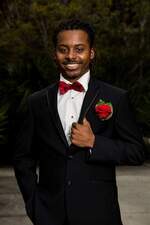 Lee Jamar Henderson was born April 11, 1996 in Durham, NC to LeRoy and Cynthia Henderson. He is the youngest of two children, with one brother Jovan Henderson.

Jamar attended Northern High School and graduated June of 2014. After initially being accepted into UNC Greensboro, he opted to stay home and attend Durham Tech where he earned his Associates degree. While attending Durham Tech Jamar maintained full time employment with Walgreen's and was there four years. He started his next job with Murray’s Dental Lab as a dental technician. His last place of employment was Absolute Dental where he worked as dental technician apprentice.

Jamar enjoyed hanging with his friends and spending time with family. Jamar developed a passion for producing music and began to devote most of his free time and energy to his craft. Some of his other favorite past times were watching sports and cheering on his Duke Blue Devils, playing video games, helping his brother with the family business, playing and entertaining his three nieces and nephew.

Jamar was loved and adored by many. His best characteristic was his infectious smile and kind spirit.

Jamar will be truly missed and NEVER FORGOTTEN

“WE LOVE YOU JAMAR ALWAYS AND FOREVER”