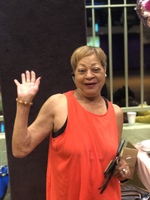 Judy Suitt passed away on Friday, December 18th in her home surrounded by her immediate family after a long, courageous battle with cancer.

She was born in Granville NC to Leander Adams and Mary Vanhook Adams. Judy attended Merrick Moore High School, class of 1964, following graduation, she worked at the Veterans Hospital and then Operation Breakthrough until she finally retired in 2008 from a long and successful career at O'brien & Atkins.

She Married Warren Suitt on August 9th,1974, took their twin daughters to California Where, Warren was
stationed in the Army. After serving a few years of service, they moved back to Durham where they continued their journey of 53 years of marriage.

Judy loved to mingle with her family where she could express her love to them through cooking and laughing and enjoying the simple yet pleasurable things life offers us.

Judy was kind, loving and a gentle soul, who will be missed immensely.