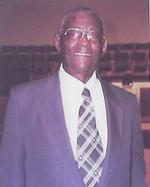 He was educated in Little River High School. He served in the Army and
attained the Rank of Private First Class. Upon return to civilian life, he
worked for the City of Durham as manager of Beechwood and
Maplewood Cemeteries.

Joe was a member of Lipscomb Grove Baptist Church. He enjoyed
baseball, fishing on occasion, socializing with others, listening to different
types of music, such as blues and jazz, and dancing. He had a way and
personality in which most people, familiar or unfamiliar, loved interacting
with him.