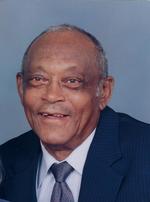 Mr. Jerry Umstead was born February 2, 1927 to the late Willis Umstead and Henrietta Roundtree. He transitioned form labor to reward on September 9th, 2020 in Durham, NC.

Jerry was drafted to the United States Army and was honorably discharged.

Jerry was a longtime member of Lipscomb Grove Baptist Church in Hillsborough, NC where he gave his life to his Lord and Savior at an early age. He was on the Trustee Board, Men's Department, and the custodial committee.

On December 9, 1963 Jerry was joined in holy matrimony with the former Miss Willie B. Everett; and from this union three children were born.

His favorite hobbies were watching softball and racing cars; his favorite car company was the Ford motor company. After being discharged from the army he developed a love of cars, which was his lifelong passion.

He was employed with UNC Hospitals for 27 years until his retirement.

He was preceded in death by both of his parents; brothers, Wallace Umstead, Walter Umstead, John Umstead, and Owen Umstead; sisters, Margaret Lunsford and Lucy Wilson.