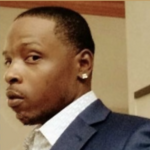 Jelani Maunda Whittington is the second of four children. As a
child he was sweet and endearing. A smart little boy who kept
us entertained with his intelligence and ingenuity. Jelani had an
active imagination and a kind and expressive heart. He was a
curious child who was too smart for school. He would take and
pass all his tests, then roam the halls with the school principal
or the janitor, to fight the boredom. He was a 99 percentile
student that hardly attended class, Genius he was often called.

As a young man Jelani moved around a lot. Living in New York,
Washington DC, Georgia, Virginia, and California for a short
time, coming to rest in North Carolina. He was not afraid to try
new places and new experiences. He dropped bars and lines as
rapper JLineUP and he had a small role in a popular mini-series.
Jelani lived his life out loud.

Jelani's pride and joy were his children, He was dedicated to his
daughters, a loving father who always wanted the best for them.
He had very special relationships with each of his girls. A
loving caring man, who made a strong impression on everyone
he met, Jelani's smile left a lasting impact as did his fascinating
mind. He will be missed by more people than we know, for he
touched so many in his life.

Jelani is survived by his loving parents, and grandmother; his
siblings Omari, Tafari, Ovid, Rakiyah, and Marcus; his children
Jadah, Janae, and Jadien; his granddaughter Samayah and a host
of aunts, uncles, great aunts nieces, nephews, relatives and
friends.

Jelani will be met in Heaven by his sister Njeri Efuru Folami
Whittington, RIP my heavenly children.