To share your memory on the wall of Harriett Williams, sign in using one of the following options:

Harriett was educated in the public school system and graduated from Durham High School in 1962. She graduated from the nursing program at Durham Technical Community College and worked as a Licensed Practical Nurse. Hariett was employed with Duke Medical Center until her retirement in 2000.

Harriett was married to Roland Williams until his death in 1998. Harriett joined St. John's Missionary Baptist Church at an early age and served on the Youth Choir and Usher Ministry.

To send flowers to the family or plant a tree in memory of Harriett Louise Williams (Prince), please visit our Heartfelt Sympathies Store.

Receive notifications about information and event scheduling for Harriett

We encourage you to share your most beloved memories of Harriett here, so that the family and other loved ones can always see it. You can upload cherished photographs, or share your favorite stories, and can even comment on those shared by others.

Posted Jul 02, 2020 at 11:47am
We are deeply saddened by the passing of our dear cousin, Harriett Williams. A lot of great memories were created and shared. Although, we will miss her, we know that to be absent from the body is to present with the Lord. 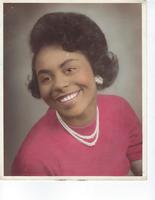