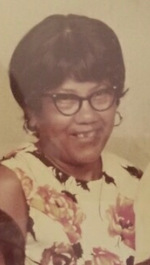 Emma Lee Mangum Garrett, daughter of the late Waylon and Millie Mangum, was born on March 27, 1926, in Wake County, NC and departed this life March 12, 2020 at Rose Manor in Durham, NC.

Emma was married to the late Freeman Henry Garrett and to this union four children were born. Emma was a loving mother, grandmother and great-grandmother. She was also an outstanding housekeeper and retired from East Durham Seafood.

Emma was preceded in death by her son John, two brother and two sisters.