To share your memory on the wall of Emma Garrett, sign in using one of the following options:

Print
Emma Lee Mangum Garrett, daughter of the late Waylon and Millie Mangum, was born on March 27, 1926, in Wake County, NC and departed this life March 12, 2020 at Rose Manor in Durham, NC.

Emma was married to the late Freeman Henry Garret... Read More
Emma Lee Mangum Garrett, daughter of the late Waylon and Millie Mangum, was born on March 27, 1926, in Wake County, NC and departed this life March 12, 2020 at Rose Manor in Durham, NC.

Emma was married to the late Freeman Henry Garrett and to this union four children were born. Emma was a loving mother, grandmother and great-grandmother. She was also an outstanding housekeeper and retired from East Durham Seafood.

Emma was preceded in death by her son John, two brother and two sisters.

To send flowers to the family or plant a tree in memory of Emma Lee Garrett (Mangum), please visit our Heartfelt Sympathies Store.

Receive notifications about information and event scheduling for Emma

We encourage you to share your most beloved memories of Emma here, so that the family and other loved ones can always see it. You can upload cherished photographs, or share your favorite stories, and can even comment on those shared by others.

Posted Mar 17, 2020 at 10:55am
Please accept our most heartfelt sympathies for your loss... Our thoughts are with you and your family during this difficult time.

Flowers were purchased for the family of Emma Garrett. Send Flowers

Posted Mar 15, 2020 at 10:49pm
I will miss seeing your smiling face when you came to visit. You are at peace now, rest from your journey.
Comment Share
Share via:
L

Posted Mar 15, 2020 at 08:48pm
Wish there had been time enough to share one more bowl of your favorite, Ambrosia.
I know... you had to go home. Gonna miss you
Much love to you always.
Comment Share
Share via:
LF

Posted Mar 14, 2020 at 11:04am
I extend my condolences to you and your family during these difficult times. May the soul of your mother be at peace with our Heavenly Father 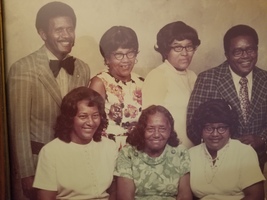