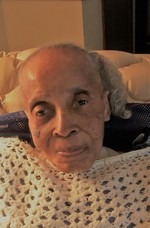 Elma L. McMannen born July 28, 1922 in Rougemont, NC to the late Christopher Cannady and Ella Cannady peacefully passed away Saturday, September 26, 2020 from home while she was sleeping. She was preceded in death by her husband, James McMannen, one son and one grandson.

Elma was a faithful member of the United House of Prayer for All People. Saint Elma Mack joined the UHOPFAP in 1943. In 1956 she became a member of the church. Thus her journey began with the Lord, she worked with various auxiliaries and served faithfully until her health declined.

In the late 1950's Daddy Grace Grace, Founder, offered her the position to be his Secretary. She declined because she had a family. Instead, she became the Assistant General Secretary in the House of Prayer in Durham NC.