To share your memory on the wall of Clarence Jones, sign in using one of the following options:

To send flowers to the family or plant a tree in memory of Clarence Jones, please visit our Heartfelt Sympathies Store.

Receive notifications about information and event scheduling for Clarence

We encourage you to share your most beloved memories of Clarence here, so that the family and other loved ones can always see it. You can upload cherished photographs, or share your favorite stories, and can even comment on those shared by others.

Posted Mar 03, 2019 at 05:38pm
irember mr jones when I was younger he used to be friends with my grandfather rd daniels I was one of the grand daughters sherron babe mckoy he used to ride motorcycles with him that was his best friends he will truly be Missed god bless you and your family you used to come up their around me fluffie robin and shoronda michelle kim renee darrly and aunt constance. and grama mat pam trico tina vanessa and everybody we will miss you . I will pray for your family god has a true angel at heart, god bless you
Comment Share
Share via:
SW

Posted Feb 26, 2019 at 11:15pm
I always loved hearing Mr.Clarence singing, Sending up my Timber. That song really spoke to my spirit. What a very kind and mighty man of God he was. I rejoice in knowing that he is reunited with his sweetheart, Mrs. Alice. Their love for each other shined very brightly for all to witness and aspire to achieve. I thank God I had a chance to know of them.
Comment Share
Share via:
SW

Posted Feb 26, 2019 at 05:31pm
To the family, my sincere condolences. Although I didn't know him as long as other UBC members, Deacon Jones was always a wonderful beacon of light and joyful to be around. His presence has been and will continue to be missed. God's peace and blessings be upon you all and give you comfort.

Posted Feb 26, 2019 at 04:45pm
To the family of Mr.Clarence Jones.Our sincere condolences to the family.He will truly be missed.Ms.Ethel Holloway and Family.
Comment Share
Share via:
DL

Posted Feb 26, 2019 at 02:18pm
Another Legend of UBC is gone. We will forever hold memeories of him leading song (senior male chior). I will never forget him driving the blue church bus. Always a smile and a hug every church event and every sunday service. We will hold those memories dear to our hearts. To the family you're in our thoughts in prayers.
God Bless
Sharron, Frank(Bucky) and Dean-Na Pratt
Comment Share
Share via: 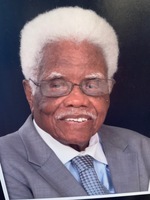