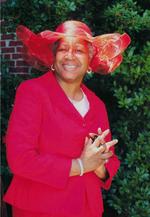 Charlene Barbee was born in 1948 to Osker and Lennie Harmon. She was the oldest of 5 children she was preceded in death by her father and brother.

Charlene was precocious and resourceful child. She began her education at Medill Elementary School and graduated from Crane High School in Chicago, IL. Charlene accepted Christ at an early age under the leadership Rev. W. W. Taylor at Shiloh Baptist Church in Chicago.

After high school, Charlene worked, at the tallest building in Chicago; The First National Bank. After working in the corporate world, she decided to go away to Iowa State University, where she graduated with a degree in business. While visiting North Carolina she met an art professor at North Carolina A&T State University in Greensboro, NC. They were married and she relocated to North Carolina. Later she joined Union Baptist Church where she was active until her health failed.

Known as Mrs. Bee with the church folk, she loved wearing her big hats. Charlene looked forward to traveling, holidays, family reunions, and fellowshipping with the Missionary Ministry, and volunteering at the nursing home with her sister’s in Christ.

Charlene lived and practiced the belief: I’ve never met a person I couldn’t and wouldn’t talk to.