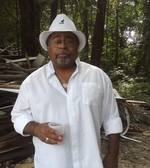 Mr. Calvin DeLacey Parker, affectionately known as “Cowboy”, was born on September 14, 1951 in Oxford, NC to the late Mildred and Joseph Parker. He departed this life on October 10, 2019 in Durham, NC. The Parkers moved to New York as a young family and remained there for several years.

Cowboy received his education in NY and there, he also joined the Air Force. Later he returned to NC and met the late Eleanor ‘Elle’ Whitted Parker and her son Brian Whitted, from this union, two daughters were born. In 1987, he married Janice Crump Parker and her son Edward Crump. He retired from the Durham VA where he worked as a Medical Supply Tech for over 20 years. Cowboy was an active member of Shepherd Memorial Lodge #840.