To share your memory on the wall of Calvin Parker, sign in using one of the following options:

Cowboy received his education in NY and there, he also joined the Air Force. Later he returned to NC and met the late Eleanor ‘Elle’ Whitted Parker and her son Brian Whitted, from this union, two daughters were born. In 1987, he married Janice Crump Parker and her son Edward Crump. He retired from the Durham VA where he worked as a Medical Supply Tech for over 20 years. Cowboy was an active member of Shepherd Memorial Lodge #840.

To send flowers to the family or plant a tree in memory of Calvin DeLacey Parker, please visit our Heartfelt Sympathies Store.

We encourage you to share your most beloved memories of Calvin here, so that the family and other loved ones can always see it. You can upload cherished photographs, or share your favorite stories, and can even comment on those shared by others.

Posted Oct 17, 2019 at 06:46pm
Sending condolences from the Durham VA, Medical Center Supply Technician to the Parker family.
Mr. Calvin truly took pride in serving his fellow veterans while wearing his cowboy boots. You will be missed.

Posted Oct 15, 2019 at 09:20pm
SENDING MY HEART FELT CONDOLENCES AND PRAYERS TO THE PARKER FAMILY. FROM KENNETH AND OPHELIA BELL AND FAMILY....
Comment Share
Share via:
WH

Posted Oct 11, 2019 at 02:28pm
Our family send our deepest condolences.. Mr parker was always caring and respectful to his family and friends.. Cowboy you will be greatly missed..
Comment Share
Share via: 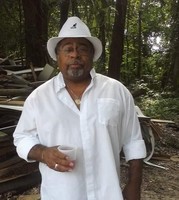