To share your memory on the wall of Antonio Steele, sign in using one of the following options:

Print
Mr. Antonio Steele, son of the late Lucious Marie S. McLean, was born on August 2, 1964 in Durham, North Carolina. He was a brother, nephew, uncle, cousin and a friend to many. Antonio died on February 21, 2020.

Antonio was educated in t... Read More
Mr. Antonio Steele, son of the late Lucious Marie S. McLean, was born on August 2, 1964 in Durham, North Carolina. He was a brother, nephew, uncle, cousin and a friend to many. Antonio died on February 21, 2020.

Antonio was educated in the Durham County school system. He was a member of St. John Missionary Baptist Church. Mr. Steele held various jobs within the Durham community. He was an avid fan of the New York Giants football team and the Duke University basketball teams. He loved his family and some of his most favorite memories were of the Glenn McManus family reunion and the McLean family reunion.

To send flowers to the family or plant a tree in memory of Antonio Marcellus Steele, please visit our Heartfelt Sympathies Store.

Receive notifications about information and event scheduling for Antonio

We encourage you to share your most beloved memories of Antonio here, so that the family and other loved ones can always see it. You can upload cherished photographs, or share your favorite stories, and can even comment on those shared by others.

Posted Feb 27, 2020 at 10:18pm
Going to miss you Big T. You could always bring a smile to my face and make a stranger a friend. We had just spoken 2 days before laughing about how you were trying to make your care personal your girlfriend. Your voice was full of joy and I will always remember just that because that was just who you were. Cousin until we meet again RIH. Buffie
Comment Share
Share via:
CT 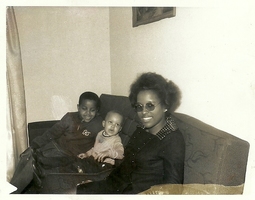