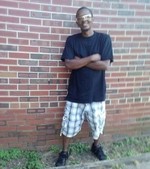 Mr. Anthony Carr was born on April 17, 1968 in Durham, NC to Opheila Hall and the late Larry Fleming.

He worked construction as a contract painter for years. Anthony really enjoyed fishing and could be found always joking, smiling and laughing.

He was preceded in death by his stepfather, John Hall and his grandmother, Belauah Mae Carr.