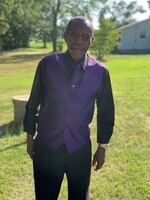 Ancie Howard Allen, affectionately known as “Howard”, was born on July 27, 1947 to the late Joe Lee Allen and Laura Bullock Allen. Howard was called for eternal rest on November 28, 2020.

At an early age Howard became a member of Greenfield Baptist Church. He faithfully served in the Male Chorus, Mass Choir, and an active member of the church. Howard was born and educated in Granville County. He graduated from Hawley High School in 1965. Shortly after graduation in 1965, Howard enlisted into the US Army where he served this country for 11 years. After being honorably discharged in 1976, Howard began working as a Machine Operator at Golden Belt. He remained there for 17 years.

In 1990 Howard married the late Edith Suitt Allen. They were married for 14 years.

For years, Howard was known as the neighborhood mechanic and could be found tinkering on just about anything with a motor. He remained active until retirement where he then preferred to “watch someone else do the hard work” as he would say. He enjoyed family time, watching car races, and if a pretty woman was around, he was sure to flash his smile.