Obituary for Allie B Malone (Austin) 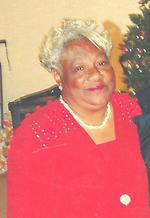 Mrs. Allie B. Austin Malone, daughter of the late Pearlie Peoples and Obie Austin, passed away on 10/11/2019.

Allie was a member of the Preiss-Steele Choir and enjoyed being at the W. D. Hill Recreation Center. She worked at Duke for 25 years in Dietary Services and at McDonald’s for 15 years. She enjoyed singing, playing video games, fishing and spending time with her grandchildren.