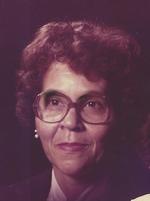 Alberta Price Leasure departed this life on February 8, 2020. "Lance" as she was affectionately called by her family and friends, was the fifth born of the late Otis and Eliza Price.

Born in Madison, North Carolina on February 28, 1928, she was a devoted mother, grandmother, and caring friend.

She received her education in public schools in Madison, North Carolina, graduating in 1945.
She was married in 1946 to Nathaniel Welch and to this union two children were born. Ellen and Nathaniel. In 1964 she was married to Walter Leasure.

Alberta moved to Washington, DC in 1967 and worked in Federal government until she retired. She first joined Allen Memorial Church and later The New Macedonia Baptist Church in DC. Alberta later on relocated to Durham, NC and joined Union Baptist Church.